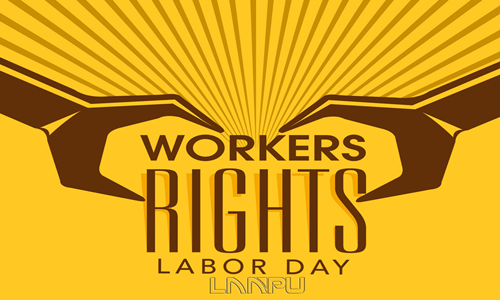 51 international Labor Days call 51 sections, May 1 in every year.It is the whole world labor common festival of the people.As for"51 causes of the section"s are such:

This stanza comes from the worker’s big strike of American Chicago.On May 1 in 1886, Chicago of 20 in order to fight for practicing eight hours to work to make but hold the big strike, many ten thousand workerses pass by hard of bloodshed conflict, acquired the victory finally.For memorial this time the socialist that the worker’s one who exercise, July 14 in 1889, from all countries Marxist call represents the conference, Parisian solemn and impressive open in France.

On the conference, attend meeting to represent the consistent approval:Common festival that May 1 settles for the international proletariat.This resolution gets the international community, the worker responds to actively.On May 1 in 1890, the working class of Euro-American all countries leads off to go into the street, holding the grand demonstration and holding a meeting, fighting for the legal rights.From now on, every time round this international community labors the people to all want the catcall, parade, to show to celebrate.

The Chinese people celebrate the activity of the Labor Day and can trace back to to 1918.Is a year, etc. of some knowledge members of revolution at Shanghai, Suzhou ground sends forth to introduce toward crowd"51" of handbill.

On May 1 in 1920, worker’s crowd of etc. of Peking, Shanghai, Guangzhou city goes into the street to hold the huge parade of threatening force and hold a meeting.After new China establish, our country in December of 1949 will"51" settle for the legal Labor Day.

"51" night before lasts of 1921, the long and hot store labor extension school that summer waits for someone to establish in the communism group of Peking member in, the workers learn to sing 《 51 memorial songs 》 .

Its lyrics is: "The beautiful freedom, the star of world, puts together me red-blooded, sacrifice for him, want to sweep away the force system everything clean, remember the beautiful day of May first.The red flag dance in the wind, walk bright road, each exhausted ability, each take need, don’t divide the rich and poor high or low, responsibility only mutual aid, wish hard everyone is together enterprising."

This stalwart and emollient song, from grow the teacher of the hot store labor practice school and University of Peking to progress the student to create the plait but become together. pre：Tomorrow will be Dubai 2016 Middle East Electricity Exhibition
next：MEE 2016 is Fast Approaching
Inquiry
Please feel free to give your inquiry in the form below. we will reply you quickly!